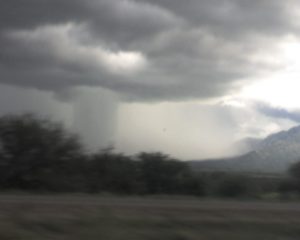 Several large cows were standing up against the wire fence on both sides of the dirt country road watching me, while chewing the rich grass from their fields and mooing occasionally. It was serene and would have been enjoyable after the fresh rain that had fallen, if I wasn’t standing on that road looking at my truck lodged into the wheel tracks of a tractor that had gone through the road earlier and left its 12 inch deep muddy “footprints.” The wet road was passable until I hit that section where the farmer dug his tractor’s mark and there I was, stuck in that gray mud. The kind of mud that sticks to EVERYTHING and WON’T LET GO! I felt like Jeremiah who was trying to do the things that God had called him to do and they threw him into the cistern (Jeremiah 38). Stuck in the mud, not going anywhere, no one to help, alone with God!

I had been on my way to lead a worship service in a small town nestled in the countryside of Uruguay, when I decided to take this shortcut through the fields, on this dirt country road, instead of the well paved, well known, but lengthier road. So there I was, just me and God, oh, and the cows, wondering what I was going to do with my truck really stuck in this gray goo and miles from anywhere and anyone, except the cows, of course.

Have you ever felt like that? Have you ever tried to do the best you can and some obstacle seems to position itself directly in the way? Maybe the intention was there, but you made a choice that got you stuck in the mud. Maybe you knew the right way to do whatever it was for God, but just thought, “If I do this little shortcut, I can save myself time and energy.” I think we all have. The metaphor of being stuck in the mud is not lost on us, especially in the last few months.

I hope this little story blesses you and that in the richness of God’s grace He will continue to move and teach us no matter the situation. Moo. That’s “amen” in cow.

One Reply to “Moo”